First, I want to thank CCO for inviting myself and this group to this event in order to learn more about what is happening when it comes to policy regarding the economy not only in Kansas City but the Nation as well.  Special shout out to Micah Chrisman for getting in contact with me!

About a month ago, I was invited to go to the Moral Economy Summit hosted by Communities Creating Opportunity (CCO).  This was an event that would prelude the hearing that took place here in Kansas City regarding Payday Loans.  There were many speakers, activists, people of religion, that were there.  The main speaker that was there was Eric Liu, best known for being the Deputy Assistant to President Clinton for Domestic Policy and creating Citizens University.  I will talk more about him later. 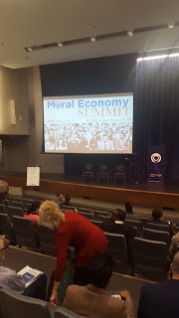 The conference, for the most part, was fantastic.  We had the opportunity to hear many different perspectives on the goal of achieving a moral economy and having a conversation with like minded people, that we should have an economy that works for everyone.

Over the course of the conference, I believe that Eric Liu spoke three times, and we had other guests that were fabulous speakers as well and had several workshops, I went to one on childhood programs and the Federal Reserve.  The overarching topic being equality of opportunity, and the issues in our community and how they affect us all, including childcare, paid family leave, payday loan interest rates, and that change in our economy must happen from the “bottom up and the middle out” (Eric Liu said that). 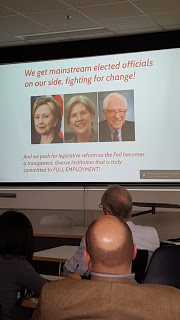 One thing I found very interesting was that this event took place at Rockhurst University, about a block away from my academic home, and there were not any economists invited to speak.  UMKC has one of the best economics programs in the country that actively studies these sort of things, and I was very surprised that I did not see any of my professors.  Granted, I would not think that anyone who is for a free, unregulated, individualist, market would even go to something like this and need to be swayed, but it is nice to know that there is research and data to drive home the message.  However, the anecdotal evidence and the solutions offered were great for the normal, non-economics-major person.  🙂

Going back to Eric Liu, he gave some fantastic anecdotal speeches that I thought motivated the crowd that he was speaking to.  He spoke about being literate in power and how to organize your organizations to facilitate the change that we must bring about.  He also spoke about a “mass multicultural democratic republic society,” which is something that for me, would be the goal in where we go. 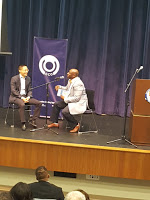 For my second breakout session, I went to the one about the Federal Reserve and maximum employment.  This ended up being more how the Fed can control the minimum wage (which while it influences it, that is part of the legislative body’s job).  This was extremely interesting and was eye opening how many people in charge of the Fed are former corporate executives or on Wall Street.

One thing that kept coming up at this conference was the massive amount of income inequality that we have in this country and how the rich have an “opportunity monopoly.”  While I would say that is mostly true, I would also argue that other factors than just money influence that such as race, gender, and sexual orientation.

The main thing that is extremely important about this is that we must persevere and keep fighting for the leveling of the playing field.  Our economy currently is not working (22% of children live in poverty in the richest country in the world.  Tell me how that works), and we must make it better for all people if we are to continue thriving in the global market.

There was an error retrieving images from Instagram. An attempt will be remade in a few minutes.